Showing posts from September, 2022
Show all

Installing the Ceiling in the Little House 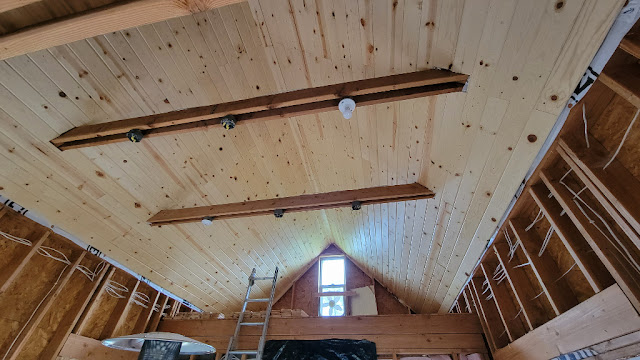 After a very long wait (with disease, inflation, and supply problems affecting the nation), we finally were able to put together a trip to install the tongue and groove ceiling at the Little House.   We had put this off during the pandemic, because supplies were very hard to get.  Then when lumber was available, the cost had more than doubled from pre-pandemic times.  Finally, after waiting it out, the prices of the 8-foot tongue and groove pine boards at the home center had dropped from nearly $15 per board to a little over $8 per board. I searched the store's online site for a location that had a large enough supply.  After seemingly found a store nearby, I put in an online order for them to pick a little over 100 boards from the 150 they said were in stock. Shortly later, we received an email telling us that the order had been cancelled, because they actually anly had 30-something in stock, and most of them were damaged in some way. So we went to another nearby store to look for
Post a Comment
Read more
More posts